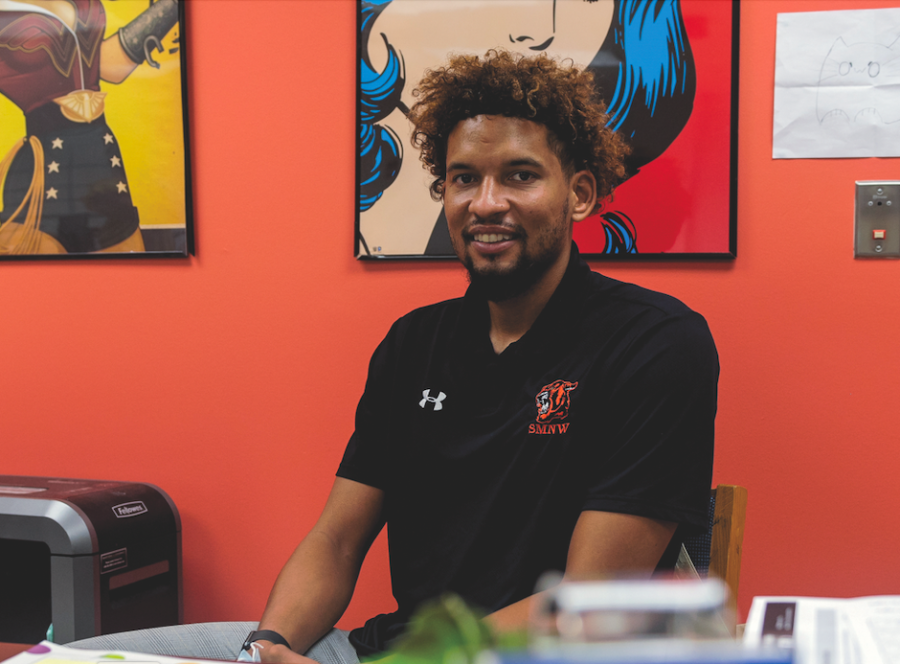 What does your position entail?

It entails mentoring and guiding young kids with behavior disorders.

What does a day in your life look like?

I travel from class to class, each class has different kids, some I might have twice, some I might have three in one class. I go in there to be a co teacher, not to teach them, but once the teacher relays the message or homework, I’m there for any other questions they might have asked. So it’s almost like a para, but it is not, because I am actually having my own class. I teach my own class here. It’s social skills.

What inspired you to go into this field?

I was a cadet teacher when I was here, it’s in a different spectrum of SPED. I just love giving back to kids. Right after I got done playing college basketball, I got right into teaching and coaching, just because I get a better fulfillment giving back than I would have ever got playing professionally. So coming back and giving back to kids. I went to school here, I graduated in 2011. So, being able to come back and give back to the student population right now is very beneficial, because a lot of kids need it, especially after COVID-19.

How was Northwest changed from when you went here?

It’s changed a lot. I feel like we have a lot of good kids here now. Obviously, we have some kids that are misunderstood and stuff like that. I just think we have a lot better staff. It’s just a different age where we listen to kids instead of yelling at them first. Just trying to keep that motion going forward.

What makes Northwest stand out from other schools?

Our diversity. I feel like the number of different kids we have from races to genders to whatever they classify themselves as is amazing. And everybody is very open to it. And I feel like there’s a lot of support, there could be more, but there’s a lot support between the students than there was when I was here.

What is the highlight of your year so far?

Coming back to school, being able to see my kids and build a relationship with them in person. That’s a lot more beneficial.

What are you most looking forward to this year?

I’m really, really looking forward to getting to know some of the kids that I haven’t got to spend a lot of time with. Of course, I have kids that are in my class, but there’s there’s 19 kids in the MOVE program, and I only see seven on a daily basis. Getting to know some of the other kids would be one of my goals. Trying to push for positivity is one thing that I want to keep pushing forward.

Could you talk a little bit about the MOVE program?

So in the MOVE program, we deal with kids from all different spectrums. It’s not the autism spectrum, but it’s more of behavior disorders, so kids could have been abused or went through a type of traumatic experience when they were younger. When you grow up, your body’s going crazy, so just trying to help mentor them. That’s what this program is for. It’s not just for Northwest, it’s for the whole district. It’s all Shawnee Mission schools. A lot of my kids aren’t supposed to go to Shawnee Mission Northwest, but because of this program, they are to come to this school.

What are your goals for the year?

So I have different goals, because I’m a coach here too, I coach basketball. So what my goal is for my basketball team is to get to state and compete for a state championship. We have a lot of good kids: Landon Wagler, Damare Smith, Dante Wheatcroft, a lot of good kids. In this program, I want everybody to have passing grades. I think that’s one of my biggest goals, to have everybody have passing grades and move on to the next.

If they ever need my cell phone number, I will give it to them. I don’t like to post it, because I don’t need everybody to know it, but if a kid really does need my phone number to talk to, I will give that to them. Also, my email. If you just come up to me in person, I’m a really approachable person.

Where have you worked before this?

So I worked at a school called Wasatch Academy. It’s an independent boarding school in Mt. Pleasant, Utah. I coached there on a nationally ranked team and I was also an adviser there. So I got to give back to a lot of the kids that went to that school were kids that have behavior disorders, too. They just had parents with a lot of money, so they sent them to boarding school.

What is one thing you would say to the NW student body?

Let’s have a great year. Focus on having a positive and great year. If we are not having that, I’m here to help you.