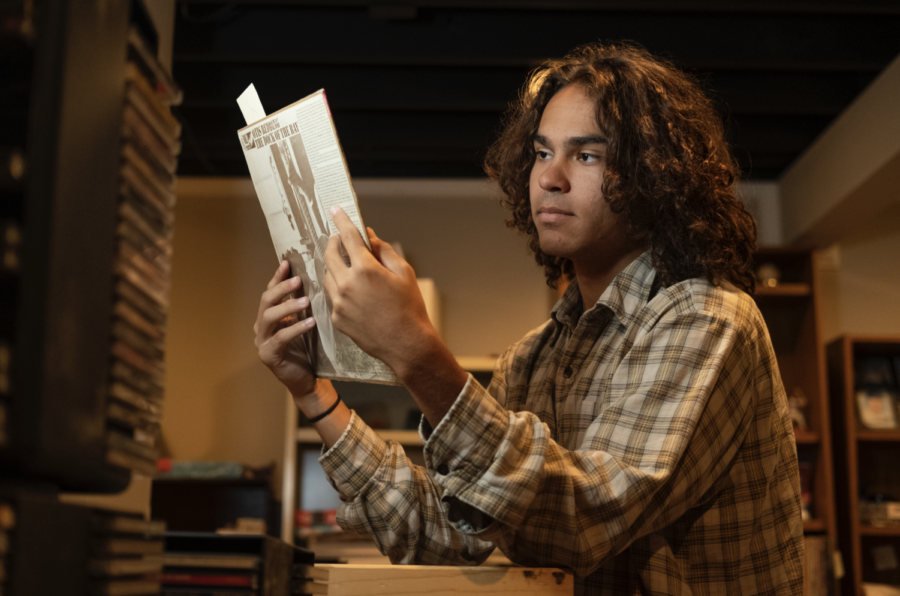 Senior Michael Houser looks at the dust jacket for Otis Redding’s “Sittin’ on the Dock of the Bay,” one of the albums owned by his grandfather.

Four years ago, the man who led senior Michael Houser to discover his passion for music died. Today his grandfather’s influence is seen in what Houser writes as he continues to process the loss

Terry Swensen: a gentle giant who smiled with his whole face, who loved the Red Sox and tolerated the Royals, whose vinyl collection numbered in the hundreds, who loved his grandson Michael Houser (NMH).

Swenson had heart problems all his life and, in 2018, spent a long stretch of time hospitalized.

In the winter of that year, he was finally cleared to leave.

His daughter and wife drove him home.

As he got out of the car, he fell to the ground.

He was rushed back to the hospital.

That night, driving on the last stretch of street before the turn into his neighborhood, Houser’s father told him the news.

It had all happened so quickly.

For years in the basement of his grandparent’s house, Houser had worked sorting hundreds of records with his grandfather. With each record Houser touched, his grandfather would give him a new quip:

“Elton John’s Greatest Hits,’ I remember the summer I got that.”

“I still remember that anecdote every time I listen to ‘Tiny Dancer’,” Houser said. “He had so much appreciation for music. Biggest love was for jazz. The intricacies of music and the way things are composed are really important to me because of him.”

A year prior to Swenson’s passing, Houser was going into seventh grade.

It was a tumultuous time in his life, but his creative writing class offered refuge. In that classroom a friend introduced Houser to the possibility of creating his own music.

Soon, Houser began writing and producing his own albums. Following his grandfather’s death, he used this as a way to process the loss.

“I started writing about how I would be okay, about the experience I went through,” Houser said. “I had already made music before it happened, so I just continued.”

Against all odds, I’m better now.

Against all odds, I’m lighter than a feather now.

Years have passed since his grandfather’s death, but Swenson has stayed with his grandson. In 2021, Houser released an album titled “3”. “Shame” is one of the last few songs featured on that album. He wrote:

The loss of grandfather was a pivotal point

Do I quit what I’m doing or continue; basically I’m flipping a coinHe meant the most to me

I think about him all the time

Never finished organizing records with him.

That’s a crime I know he’s watching over me, make sure I stay right

Now that I think on it my taste for jazz came from him, too,

So when I listen to Miles I feel a kind of blue.

Houser played “Shame” for his mother.

“She was looking down bobbing her head to it, then when it got to the last few lines where it directly referenced him, ,” Houser said. “I wrote it in 2020 and he passed away in 2018. There had been a long period where we didn’t really come to terms with it. That was a moment that really provided closure. It showed that a part of him was in me and what I’m doing with my music would make him proud.”