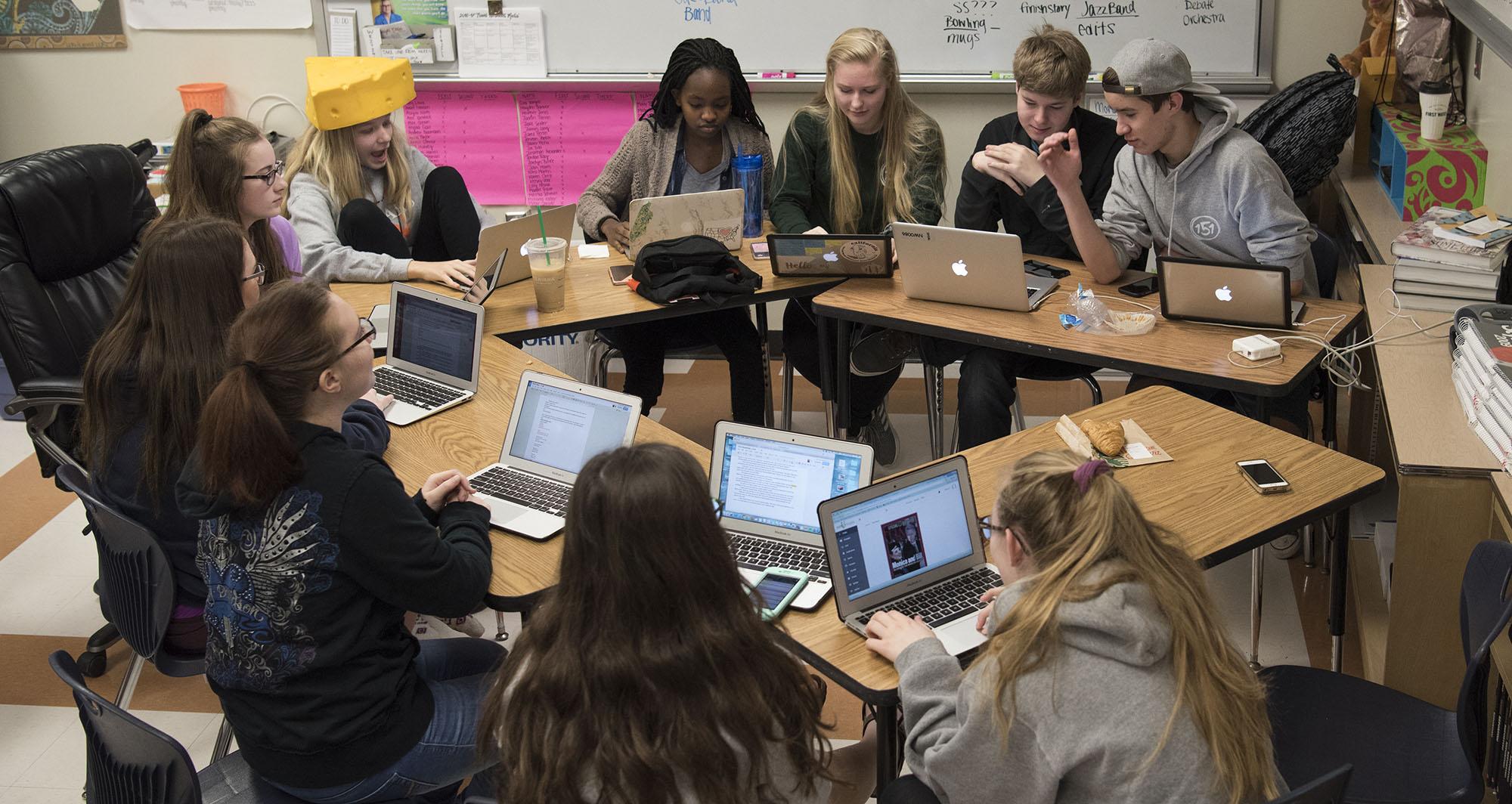 4. Promote and Model Digital Citizenship and Responsibility
Teachers understand local and global societal issues and responsibilities in an evolving digital culture and exhibit legal and ethical behavior in their professional practices.
a. Teachers advocate, model, and teach safe, legal, and ethical use of digital information and technology, including respect for copyright, intellectual property, and the appropriate documentation of sources. (page 15)

The first stories for The Lair, the Shawnee Mission Northwest yearbook, are submitted each year in mid-September. Both writers and editors are still new to their jobs, some are new to Google docs, and all are unsure of themselves and their skills, yet itching to prove what they know. The yearbook staff currently is comprised of 42 students who meet four days a week during sixth hour and once a week from 3:30-9:30 p.m. Students range in age from 14-18 years old. Nearly half are freshmen, three struggle with cognitive issues and have IEPs. With the exception of the latter three students, most are highly successful in English classes and are enrolled in Honors and AP courses. Three are IB diploma candidates. The socio-economic status of these students runs the gamut from affluent to qualifying for free and reduced lunch. The staff is 80 percent Caucasian. Fifteen members of the staff are designers and photo editors and do not write. Twenty-seven are writers.

After a writer completes the first draft and submits it on Google docs, the next step is editing.

Copy editing on Google docs has allowed for greater collaboration than was possible on paper stories; however, with this benefit has come a distinct disadvantage. ”

Too often, that disadvantage has been the lack of respect for the writer and the story. Copy editors, who loved the flexibility that Google docs offered, worked at home editing stories. They slaved over the stories, doing everything they could to improve them. Writers opened their email and found it filled with notifications from Google docs or, if they opened the story first, were shocked to see their story covered with comments, suggestions, changes and deletions. After the shock wore off, they were angry. Because the success of yearbook program depends upon bringing in freshmen staff members, training them for a year as writers and then moving them into leadership positions over the next three years, this was a problem. Nearly 50 percent of all writers joined the staff as freshmen and dropped the class either at semester or the end of the year because they were frustrated. Talking with these writers revealed that the editing process was a significant source of their frustration. The current editor-in-chief is a senior in her fourth year on staff. She remembers the copyediting process from her freshman year.

This discovery led to incremental changes in the editing process over several years as well the eventual adoption of the copy coaching style of editing this year which, in its purest form, allows only the writer to put comments and corrections on the story. The lesson plan and Keynote presentation for this unit provide more information on the copy coaching process. The focus of this entry, however, is not the teaching of the process, but the implementation and practice of the process as it relates to Google docs and its impact on both the editors and the writers.

Editors who work with writers are responsible for moving all copy from first draft to final draft. Students lead students in this collaborative exercise using Google docs as well as a face-to-face experience. The opening image in this brief slide show provides an overview of what copy coaching looks like. 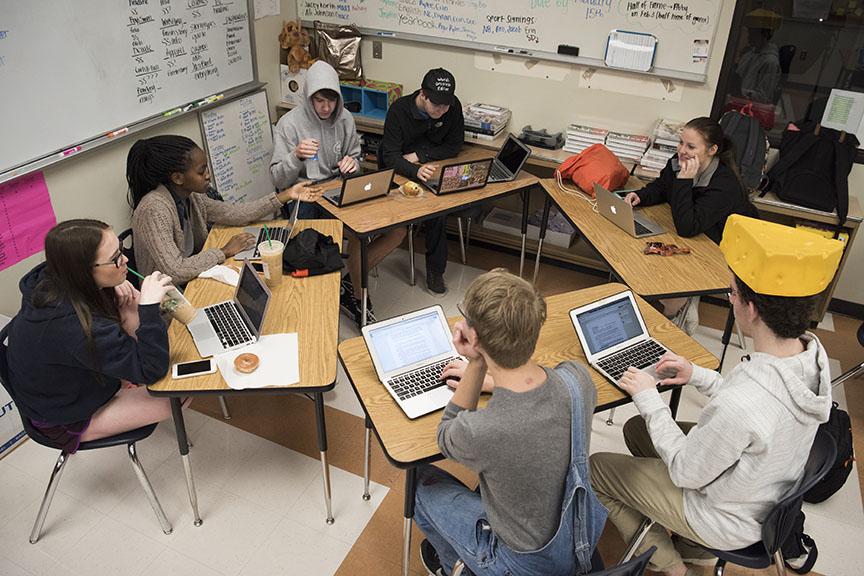 Gallery|6 Photos
Students edit final drafts of stories for the 2017 Lair on Feb. 14.

The writer (the one wearing the cheese hat in the first slide) meets with the copyediting team, the managing editor and two other writers. He reads his story aloud to the group as they follow along on Google docs. No one is allowed to type anything on the document or speak while the story is being read. Once that has been completed, the group begins to discuss the strengths and weaknesses of the story while the writer takes notes on the Google doc. The writer has the opportunity to ask questions while taking notes or argue that a particular change is detrimental to the overall impact of the story. Occasionally face-to-face encounters are not possible due to scheduling conflicts, but it is the preferred method. The instructor does not become involved with the process until the final edit. 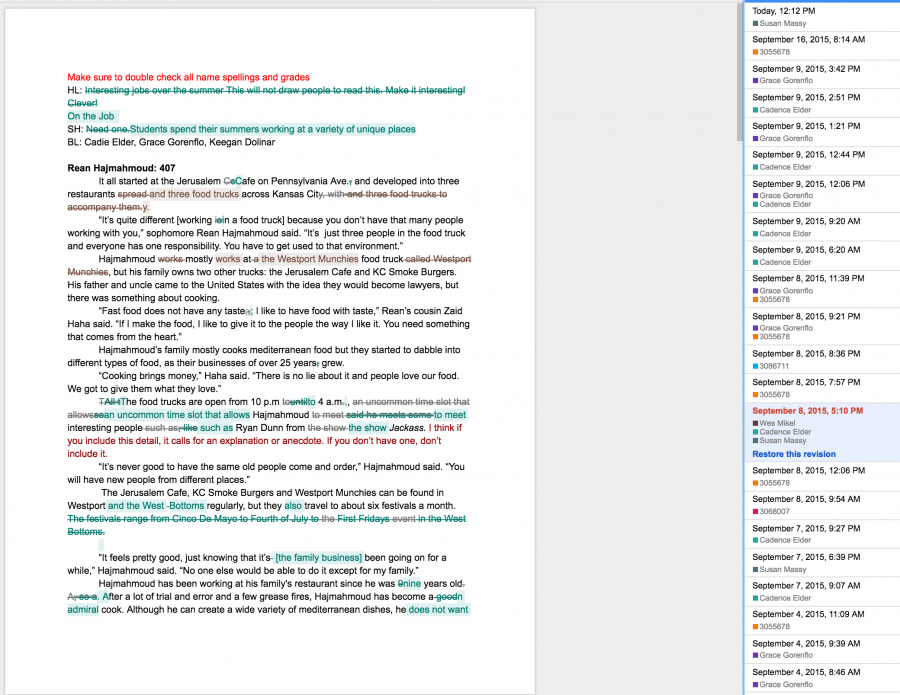 This is an example of a paper edited two years ago in the traditional manner by several students, including the copy editor and another writer. The changes are significant. Only two paragraphs have made through the process without change. Some passages have been deleted. Only one of the writers was online and on the document when the story was being edited.  None of them were in the same room. The other writer was upset by the changes.

For writers, editing can be the most feared part in the process of preparing copy for publication. Copy coaching is the opposite of copyediting. In copyediting, the editor often makes changes to a story or demands that changes be made without consulting the writer or explaining the changes. Once a story has been handed over to an editor, the writer often loses control of its content. In the copy coaching model, a writer maintains control of her story. All suggestions and comments are placed on the story by the writer who is with the editors as they go through the story. As the editors make comments and suggestions, the writer records them on the Google doc. This gives the writer a chance to ask questions or provide an explanation regarding suggested changes as well as allows the editors to see how the writer has interpreted their comments. It also allows the writer to explain how a change may compromise the accuracy of the story before sections, sentences or words are deleted. The emphasis is on content initially and then moves to mechanics and journalistic style. Copy coaching allows editors to help the writer in a less destructive way.

The copy editor struggled with this method at the beginning of the school year. He is academically talented but has significant confidence issues that he copes with by being highly critical of himself when talking to others. In his role as copy editor, he exhibits appropriate self-confidence and pushes students to do their best work. He is well liked and well respected by the writing staff. He also has a significant stutter. Although he had been an assistant copy editor the previous year, realizing that he would be overseeing the work of every writer as well as training the assistant copy editors made him uneasy.

Once the story is approved by the copyeditor, it is sent to me for the final edit/approval. In theory, my comments should result in only minor changes to the story.

We adopted this model for editing to prevent editors from all getting on Google docs simultaneously and silently making significant changes to the story either as the writer watched helplessly. Worse, these changes were made and the writer was shocked for find a story radically changed or bloody with edits the next time she opened the document. That process demoralized the writer. Because copy coaching is done face-to-face, comments are more measured and less insensitive. The reactions of both writers and editors to copy coaching have been mixed.

The writers seem to approve of the “hands-off” or Copy Coaching method and say that they both feel respected and learn to be better writers. This freshman writer has been on staff since August. She has good writing skills, is academically gifted, and has tremendous self-confidence.

Editors initially complained that the process took more time while accomplishing less. The copy editor gets right to the point.

Reflection: We have yet to master this skill. Most of the editors are themselves writers. It is easiest for them to communicate what they want done by either making the correction themselves or writing their suggestions themselves. They prefer copyediting because of this and because it is familiar. When the story is in bad shape, the face-to-face aspect makes it harder for the editors to be fully honest. The writer is often a friend whose feelings they do not want to hurt. Editing remotely is far more comfortable than talking through the problems and potentially arguing with the writer.

But the lessons I am learning go beyond just observing the process. I am learning that my role must change as well until this new skill is mastered. I need to observe on coaching sessions so that I can critique the editors and offer suggestions about both what they should be looking for and how to offer a critique. Several of them unintentionally focus only on the negative or word their comments in ways that reduce the writer to tears. Others refuse to be honest to avoid hurting the writer’s feelings and the writer of a story that does not meet our standards walks away from an editing session with the impression that the story is practically perfect. Finally, I am also becoming familiar with the concerns that my editors have — especially the frustration with the increased amount of time required by coaching.

It is in those moments when I am most frustrated that I must remind myself that we are improving the skills of our writers by coaching and will see the benefits in the future.

I need to remember that the problem isn’t Google docs or collaboration as a whole. Our issue is utilizing both the technology and method in the best possible way. Shifting from copy editing to copy coaching doesn’t simply improve one story. It will improve the next story and the one after that. The focus has shifted from improving the story to improving the writer and learning the best ways to use Google docs.

This was my first experience in putting together a web “story” (until now I thought that this was a web page). I had a definite look in mind for the story and this does not resemble that vision. I had significant difficulties in getting the quotes and images to appear in contextually correct places and just kept experimenting. In spite of significant experimentation and Googling, I can’t get the slides in the slide shows to appear in the correct order. In the first slide show, the final slide appears second. In the second slide show, the slides were so out of order that I just removed it. I have a lot to learn about achieving the look I envisioned and will be working to improve my skills.