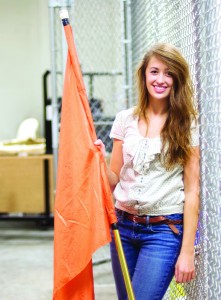 On being captain of the drill team: It’s the most stressful thing I’ve ever done, but it’s really rewarding and I wouldn’t have had it any other way. There’s so much stuff that goes into it. It’s a weird sport because, unless we go to competition, we don’t really win or lose. It’s just whether the team likes it and whether we all get along and have a good time.

On leadership skills: I didn’t really think of myself as trying to be a leader until I was on StuCo. I went to the leadership camp last summer in Tahoe. You learn so much more about yourself as a leader. I think what I’ve mostly realized is that you don’t have to be very vocal about it; you can lead in other ways.