“The Little Things” is among the newest releases to both in-person movie theatres and the HBO Max streaming service. 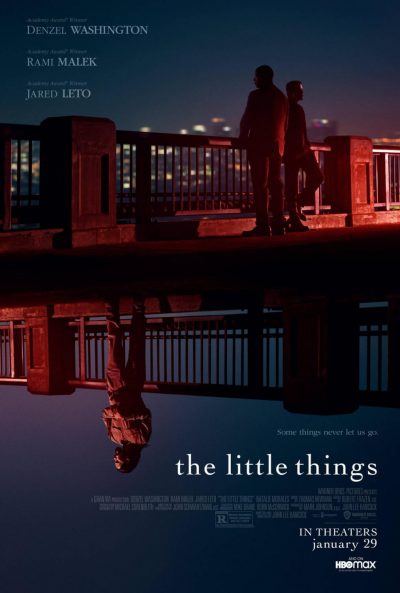 The movie stars Denzel Washington, acting as Joe Deacon, the Kern County Deputy Sheriff. The plot begins as Deacon ventures to his old homicide department Los Angeles to collect evidence from a previous case where he meets lead detective, Jimmy Baxter (Rami Malek). While he’s there, bodies begin showing up around the city.

Deacon then realizes the suspect’s means of killing are similar to that of a case from his past and joins Baxter and the rest of the homicide team in the investigation. Deacon and Baxter then begin investigating suspect, Albert Sparma (Jared Leto). The FBI soon gets called in to take over the case, leaving Baxter and Deacon with very little time to solve the case themselves.

The rest of the film follows Baxter and Deacon as they are taunted constantly by Sparma, leading to a series of angry outbursts from both parties.

The production of this movie was incredible. The film’s soundtrack, produced by Thomas Newman, gives the movie a very eerie and ominous feel. The cinematography paired with the very picturesque and mysterious sets made the movie very visually appealing as well.

My main grievance with this movie is that it left a lot of questions unanswered. For example, it wasn’t until I did further research after the fact that I learned that Deacon left the LASD after suffering a heart attack due to becoming obsessed with a case. Learning this made the ending of the movie make much more sense, but I believe it should have been made clearer in the beginning.

Another problem with this film is the lack of character development. Throughout the movie, we never really get to know the characters beyond the surface level. Deacon and Baxter are both well-respected officers that hold themselves very highly, but that is basically all the audience is given about them. We know something happened to Deacon in his past, but without knowing exactly what it is, relating to him is fairly difficult. Another example is when we see Baxter sitting by the pool with his family, contemplating the events of the investigation. We can tell that he is obviously shaken up about what he experienced, but since this is the first time we see Baxter away from his work, we don’t have the information to compare how he acted around his family prior to the case as opposed to after.

In all, this film was a marvelous watch. Though there were many plot holes, it still redeemed itself with its other outstanding qualities.