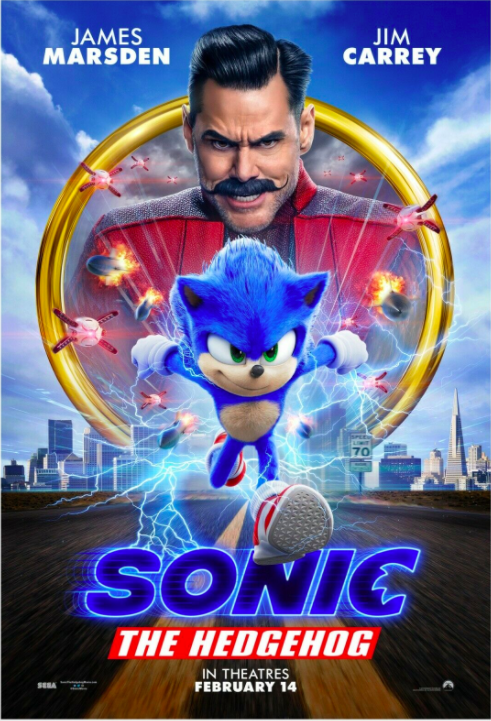 “Sonic The Hedgehog” is a 2020 Adventure/comedy film that is surprisingly good. After having a large backlash from the first trailers of the movie over the character designs, it was redesigned and is now a pretty good movie—worth a watch for sure.

The movie was first brought into news over how disgusting the Sonic character design was. There was so much talk surrounding the design that the animators actually did a complete redesign of the character that was taken better by fans than the original design. So, getting past that first roadblock really helped this movie come to be how adorable it is.

The animation in fact is actually pretty nice. The Sonic character design is cartoony but realistic. His movements are as well. The ring design also looks pretty and the robots that are in the movie also look pretty good. Overall, the animation aspect of this movie is good.

The acting in this movie is great. Jim Carry does a stellar job as Dr. Robotnic, James Marsden is awesome, and Ben Schwartz does amazing voice acting. The acting in this movie is fun and creative. They let Carry do his comedic manarizism, Schwartz does amazing voice acting that sounds just like the cartoons and Marsden does really well with interacting with the computer-generated imagery (CGI) Sonic.

The soundtrack is also pretty cool. It really adds a certain vibe to the movie. Using songs that work to add to the cartoon tone of the movie. I think this movie gains some of its charm from the soundtrack.

The story itself is pretty good. It does really well at bringing Sonic into a modern world. There are lots of heartfilled moments and also lots of fun moments. I found myself laughing and tearing up during this movie multiple times. The only problems being that this movie drags a little bit in the middle, and some parts are also too fast in my opinion. There are a lot of cliches and a lot of pop culture references, which don’t ruin the movie but also don’t go in it’s favor. Overall the movie is pretty fun to watch and is very much a feel good experience.

This movie is a really enjoyable kids movie that I could see myself watching multiple times. It does everything a kids movie should and is still pretty fun for more grown minds as well. Sure it may have some childish humor, and follows cliches and has too many pop culture references, but it’s a fun movie—a fun, feel good movie.