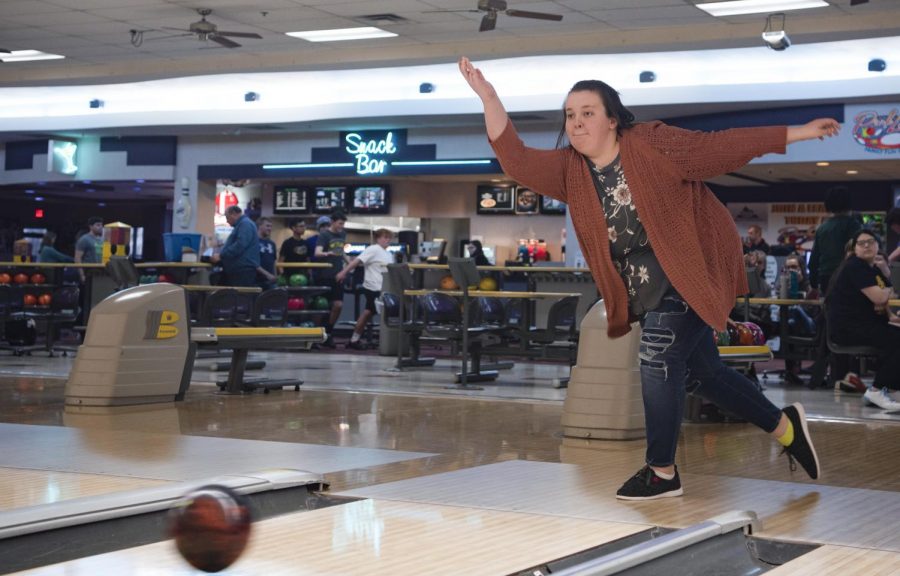 As a 15-pound Brunswick sphere rumbles down the lane, its goal is the 10 rock maple pins. Now the girls’ bowling team has found a proven formula and the senior-led team continues to roll to a state tournament that each bowler is familiar with.

Senior Cheyanne Bolin, who is currently averaging 185 for her season, has been a part of the bowling team for her entire high school career. She looks back on how her game has changed through the years.

“I really started to focus on myself to improve and become the best bowler I could to help the team,” Bolin said. “I got a lot of new equipment as well, but I really worked on my approach over the years.”

Bolin thinks that her team stacks up well against the competition this year.

“We don’t just have one good person on the team,” Bolin said. “We have a team filled with this year. We all have to step up when needed.”

Does Bolin have a favorite meet this season?

Her answer was quick and ecstatic.

“Definitely Lawrence Free State,” Bolin said. “It was such an amazing atmosphere with a lot of the biggest teams in our region. I believe it was the first time in NW history that the girls’ team had won that tournament.”

Another senior on the team has more than just her own connection to the program. Senior Charlie Queral was born into the bowling family with two older sisters, Cassie (2014 graduate), and Janie (2011 graduate), who both successfully bowled for the team. Because of this, Queral felt that joining the bowling team was a must when she got to Northwest.

Queral has learned a lot from her time on the team, not just about bowling but lessons that can be used for life.

“ not to let a bad score bring you so far down you can’t come back strong,” Queral said. “This year’s motto is ‘Finish Strong,’ and a lot of us like it because you can start your first half of a game like crap and let it ruin your mood, or use all the opportunities you have left to make your score as good as possible.”

The difference between a good game or a great game can sometimes be found in the oil patterns at each bowling alley. To do the best they possibly can, bowlers must be aware of the oil patterns and adjust the way they bowl accordingly.

“Typically oil patterns differ with each meet,” Queral said. “Depending on how it’s laid out, it can be really dry and really slick in certain areas. Bowlers don’t always know what the pattern is and part of the challenge is figuring out what the lanes are like and how your ball will respond. The oil will also shift as the games go by since almost every bowler has a different line they bowl.”

Coach Billy Dent is pleased with his team’s performance this year.

“I’m guessing that, as a team, this is going to be the best team I’ve had,” Dent said.

The Lady Cougar bowling team won the district cup Feb. 20. The team competes again today at Park Lanes in the 6A Kansas regional tournament, where the top three teams will advance to the state competition March 4.