Swim team hopes to take a dip in the state championship 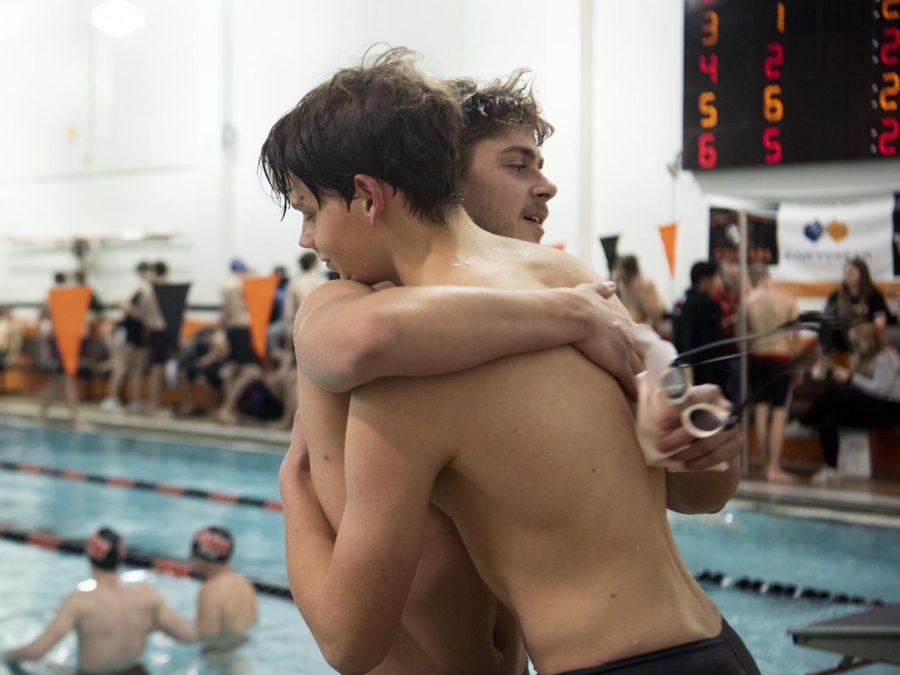 As the gun fires, the swimmers dive off their blocks and hit the water in unison. Their only thought is getting their fingertips to the wall. They come up for a breath only when they can’t hold on any longer. With each breath, the chances of taking the gold could evaporate.

The swim team, with their strong start this season, hopes to ride the wave all the way to the state competition. Their season began with practices after Thanksgiving and will continue until mid-February.

This year’s swimmers are led by team captain Scott Klein, who holds the school record for the 50-meter and 100-meter freestyle as well as the 200-meter freestyle relay. He is most proud of the record from the relay because it took three other teammates along with himself to accomplish that goal. Klein is working to finish his historic career with a bang.

Klein has been swimming for approximately nine years. He started swimming recreationally, then moved to summer and city teams.

“I was doing really well in swimming and decided to give up basketball and concentrate on swimming because I wasn’t getting much playing time,” Klein said. “I tried out for competitive teams and it turned out to be something that I loved.”

Klein has very high standards for what he does in and out of the pool.

“I hold very high expectations for myself,” Klein said. “There is no excuse for slacking even when I am not feeling 100 percent.”

One of Klein’s favorite memories of his high school swimming career was when the team returned from the state competition last year after breaking the school’s relay record.

“The race was just flawless,” Klein said. “I almost couldn’t believe the time, but I wasn’t going to question it”.

Coach Ryan Lee has guided Klein for the past three years.

“Through his hard work, we have watched him become one of the best swimmers in the state of Kansas,” Lee said. “I’m glad he’s on our side.”

Junior Brian Harrell, brother of former swim team captain Ben Harrell, was honored to be named a captain this year.

“My brother, Ben Harrell, was a team captain when I was a freshman and he was a junior,” Harrell said. “I was pretty proud of that. I figured if I kept working hard,
I could get there someday. It just shows hard work pays off and that if you stay focused you can accomplish a lot.”

Harrell sets his sights on putting his name on another piece of NW history.