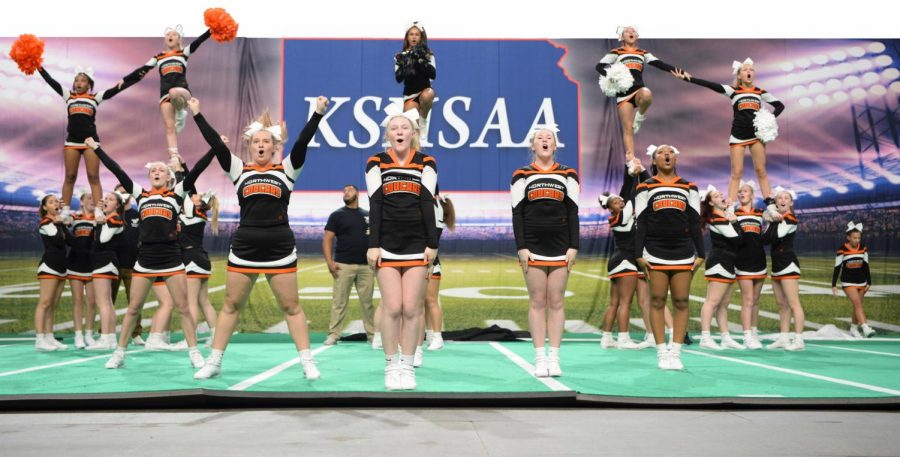 The minutes feel like hours as the competition cheer team grits their teeth in anticipation, waiting to hear their school’s name.

“The final team for the 6A State finals is …”

It never comes. Jaws drop and tears roll down the faces of the cheer team as the reality sets in. The team is in shock. As they leave the arena, the girls fall into the arms of sympathetic parents waiting near the entrance.

Head Coach Renee Chambers pulls the team to the side of the arena’s entrance.

Someone asks if she knows what place the team got.

The girls finished in eighth. Only the top six teams make finals.

The seniors had just completed their last state competition.The underclassmen have begun to realize they’ll have to wait an entire year for another shot at the state title. Individually, the squad members have years of competitive experience.

The team spent more than 200 hours practicing  for the state competition.

“We practice four days a week in class, including a block period and then after school for an hour and a half a day for a total of 13 hours a week,”  Ibarra said.

After all that practice, the only thing the team can do is prepare in their own unique way to take the floor. Senior Payton Smith makes her rounds smoothing back everyone’s hair while other members of the team choose to watch the competition.

“When waiting to compete, I like to put in my earbuds and tune everything out,” Sanders said. “It really helps me focus on my part in the routine and helps me not get as nervous.”

The state competition begins and there’s no going back. The competition consists of Fight Song, Crowd Leading Cheer and Band Dance preliminaries. Chambers tells the girls that they performed well.

Points were awarded to each team for specific components in the three competitions.  Some of the components included visual appeal, synchronization and overall impression.

Many of the girls on the team felt they were judged on what they didn’t have, rather than what they did have. Comments seemed to be based on technical choices in the choreography.

“The judges and the score sheets were subjective,” Chambers said. “I do agree with a lot of what they said. I don’t know that I ever received the feedback on what to change the choreography.”

The 200 plus hours of practice may not have paid off in the way the team had hoped, but Chambers didn’t fault their performance.

“I was very proud of them no matter what, they were perfectionists almost.”