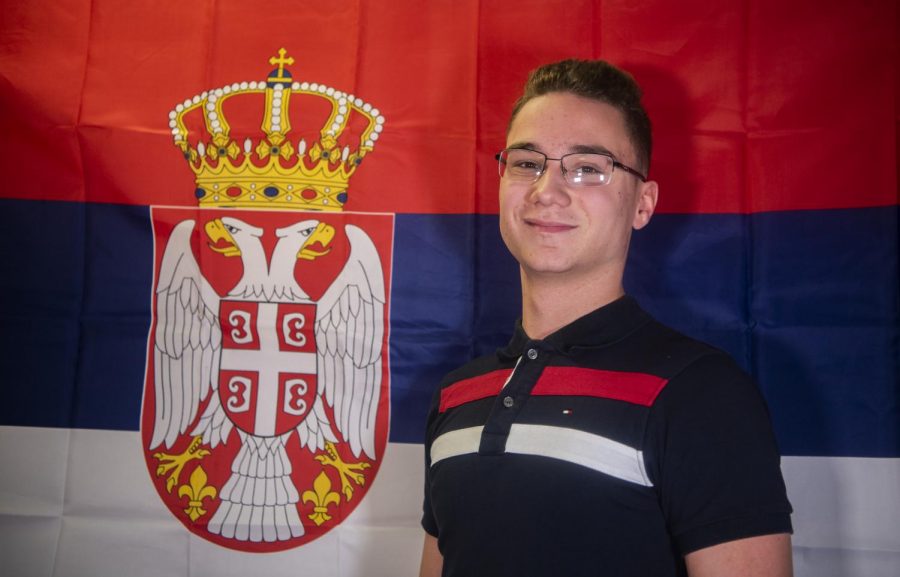 One of the biggest challenges Vasiljic has had to face in his new life is simply his name. His full name is Vukasin Vasiljic.

“In the Serbian alphabet we have letters that are not pronounced in English,” Vasiljic said. Some of those letters are in my name so I just go by Vuk.”

Most Serbian first names have some sort of historical significance. Early Serbian names were given
to children to protect them from evil spirits. The work “vuk” (pronounced like Duke) in Serbian directly translates to wolf.

“Serbian parents will give that name to kids in order to have the wolf protect them from evil forces,” Vuk said.

After just a couple weeks, Vuk accepted the fact that people were going to try as hard as they could to pronounce his name. Most still fail to pronounce the Serbian letters.

“I’m completely fine with people calling me whatever they can,”
Vuk said. “I’ve gotten V, Vuk, Vok, Vuctoria and Victoria. I’ve gotten everything.”

Earlier in the year, Vuk began the extensive application for the Future Leaders Exchange Program (FLEX). The process included language testing and was then followed by being thrown into random situations and having to react and solve the problem. After that, he and other applicants faced a second round of intense language testing and submitted a 27-page application.

“It’s extremely competitive,” Vuk said. “It’s not the kind of testing you can get ready for like your ACT.”

After the testing was done and a few months passed, Vuk packed up and got ready for pre-departure orientation. There he got to meet with other FLEX kids and speak only English before boarding a 12- hour flight to Washington D.C. After spending about a week there, Vuk boarded another flight to Kansas where he met his host family. He is currently staying with sophomore Owen Markwart’s family.

“Thelma, my host mother, treats me like her own child,” Vuk said. “She really makes me feel like I am not being treated any differently than her own kids.”

With the Markwarts, Vuk experienced many new things such as, visiting the arboretum, going bowling and even going on a road trip.

“The car rides were fun, I guess,” Vuk said. “We sang ‘Country Roads,’ many, many, many, many times, and ‘All Star.’ I wasn’t really that familiar with ‘All Star’ but it is in my head now, the entirety of the song.”

A big part of adapting to living in a different country is learning about the culture. Serbian teenagers are given a lot more freedom than American teenagers.

“So, we party and we drink,” Vuk said. “Even though it’s illegal to drink before 18, people don’t really follow that law too much.”

The culture is clearly much more relaxed in Serbia, so the way Vuk spends his weekends is a whole lot different.

“So our Saturday nights are spent in a nightclub, or we just go out,” Vuk said. “Here when you go out, you just kind of sit in the car and listen to music or go to the mall and I don’t really like that.”

One of the big changes Vuk had to face was the new rules or routines thrown at him constantly whether it was school schedule, class difficulty or just plain getting from point A to point B.

“Wherever you go, you have to go by car,” Vuk said. “In Serbia, everything is kind of close. You can walk everywhere or use city transit in bigger cities so you don’t really have to own a car.”

In June, Vuk will pack up again and fly back to Serbia. For most exchange kids, one of the hardest parts of the entire exchange experience is going home and trying to fit back into their normal lives. The FLEX program helps to ease the kids into it by staying in a hotel for a few days, only speaking in Serbian and getting re-adapted to the culture.

“What hurts the most is that lives didn’t stop there without them,” Vuk said. “I don’t think that’s going to be a problem for me because I was aware from that from the start and I don’t think I’ll have any trouble fitting back in.”

So far, Vuk’s first semester in the U.S. has brought a lot of fun new challenges and experiences. Semester two is bound to bring more.

“Everything has just kind of been great,” Vuk said. “I know I’ve been here for four months but I expect the greatness to continue.”