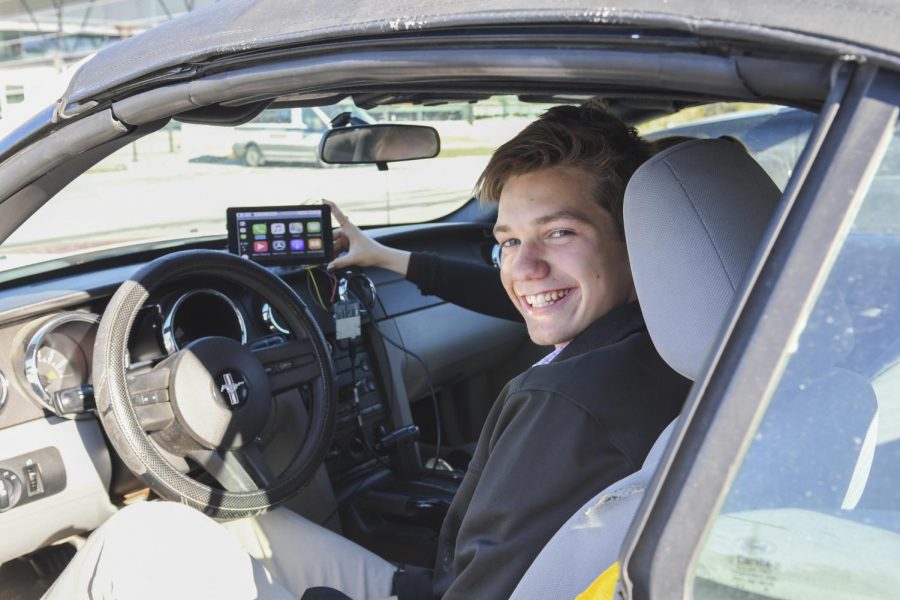 He runs cross country, he’s co-president of the Fellowship of Christian Athletes and he’s the Spirit King of Northwest. Have someone in mind? What if that list had started with, “Shawnee Mission engineering ambassador”? Still thinking of senior Ryder Jarrett?

Outside the walls of Northwest, Jarrett has been able to find passion and opportunities at the Center for Academic Achievement (CAA) in the district’s engineering program.

“You start with the basics,” Jarrett said. “Then you work your way up to more complex stuff like advanced 3D modeling and electrical engineering.”

After learning the basics, students at the CAA are able to break into their separate engineering major preferences.

“I took digital electronics because I want to mainly be an electronics and electrical engineer,” Jarrett said. “I also took the aerospace engineering program.”

The engineering program allowed Jarrett to build relationships and develop a professional background, which landed him an internship at Garmin, a multinational technology company with headquarters in Olathe.

“When I applied for the Garmin internship, my teacher pretty much said, ‘Don’t think about it too much. There’s a lot of very advanced people trying out for it. Just try your hardest,’” Jarrett said. “It was the first time that they’ve ever done an internship that allowed high schoolers to even apply.”

Despite the difficult application process, Jarrett got the internship.

Like clockwork, he went into his internship every day at 7 a.m.

“I was an aviation electronics engineer,” Jarrett said. “I worked on the in airplanes that allow the ground to connect to the airplane wirelessly. That’s what I mainly did for the whole semester.”

Despite getting an offer to keep working throughout the summer, Jarrett had plans to work with another engineering internship.

“I’m currently working at George Butler Associates, which is an electrical engineering internship,” Jarrett said. “At GBA, my job is a bit broader. I get to work on a lot of different types of projects, anywhere from designing bridges in Texas to designing small circuit boards for drones.”

Jarrett’s work expands past even his internships and the CAA.

“The average age of cars on the road right now is 12 years,” Jarrett said. “Everybody’s trying to get those new technologies that the newer cars are coming out with. But as the newer cars come out, they’re also more expensive.”

Since the average person can’t go car shopping every time a new feature is released, Jarrett came up with an idea: a small computer that can plug into an older car and improve the functionality of hardware already built into that car.

“Me and my teammate, senior Brogan McKenzie, are making a little device that can control your music, navigation, weather, backup camera and side cameras,” Jarrett said. “We’re programming it, drawing all the schematics for it and, hopefully by December, it should be finished. We already have our first prototype that is pretty much all the way done.”

The idea has stuck with Jarrett for almost a year and a half and he now works on it daily as part of his education at the CAA. The device, however, goes further than just a grade.

“ get a product out there,” Jarrett said. “If people actually start liking it, then obviously get a provisional patent, then an actual patent. We have a lot of contacts with patent lawyers to figure something out there. But our end goal is just to provide the community with something they want and need.”

“We have a goal for you to have a virtual assistant that can do anything in your car, even drive for you someday,” Jarrett said. “This isn’t like, ‘Okay, we’ve finished it. We’re done.’ As long as technology improves, we will be improving this device.”