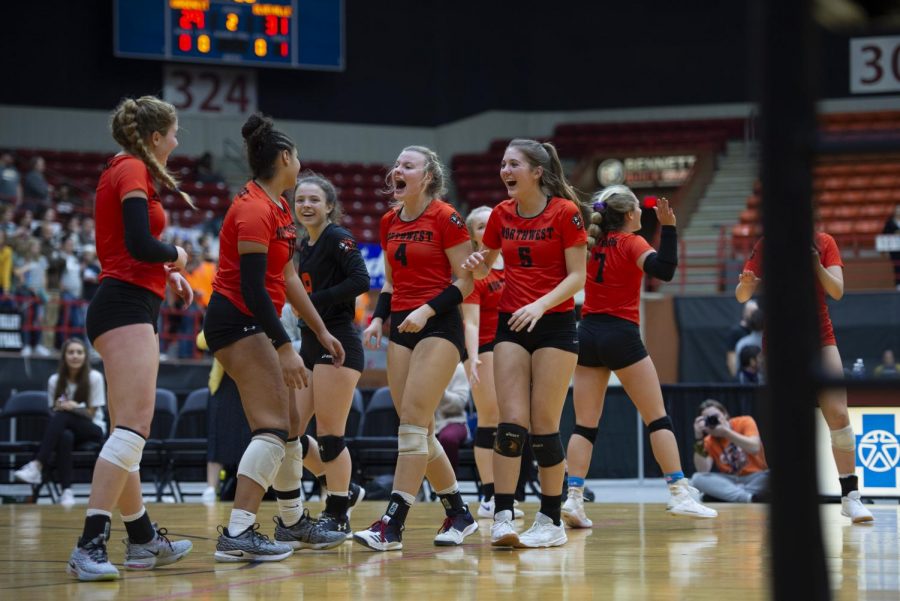 Eleven volleyball players lay in a circle around the center of the Auxiliary Gym on Oct. 26.

She kissed the cougar head in the middle of the floor before heading into the Main Gym to play Mill Valley for the substate championship.

At the start of this month, the volleyball team made it to the state volleyball tournament for the first time in three years. The girls went into the tournament with a 29-10 record after beating Mill Valley and JC Harmon in the two weeks before.

“We wanted to go to state so bad,” McCarthy said. “We really proved that we wanted it.”

Due to their success in the regular season, Northwest hosted the substate tournament.

But that doesn’t really tell the story of the season, which started off slowly as the team adjusted to their youth (only two seniors and two freshman starters).

“We knew we were going to be a good team and before the season we were playing better as a team,” McCarthy said. “That’s when we knew that we were already better than last year’s team. Throughout the season, we just got better.”

October is the month that volleyball teams expect to be at their best.

“Coach Specht stressed at the beginning of October that this was when our best volleyball should be played,” team captain Rylee Garrett said.

That sense of expectation paid off on Oct. 10.

“A big game for us was when we beat SM East at their senior night because their crowd was huge and we were definitely the underdogs,” McCarthy said. “We really played as a team that game.”

On Oct. 26, the team headed into the substate tournament. With their minds focused on going home with a win, their morning consisted of team bonding, visualization and some extra practice to hype them up for their next two games.

“We were playing our best volleyball,” coach Susan Specht said. “It wasn’t super tight games, so we could kind of taste the victory.”

After the Mill Valley player hit the net giving the Cougars the winning point, the team ran to the cougar head, hit the floor and the crowd went wild.

“We beat them in two sets and totally crushed them,” McCarthy said. “That game really showed how much we had progressed and how much potential we had going into state.”

The team’s motto this year was “Do your job.” This meant that in order for the whole team to be successful, every player had to make sure she was taking care of her responsibilities.

“We work hard every day on communication, effort and attitude — the things that we can control,” Specht said. “We want to play selflessly with each other and create an atmosphere that is enjoyable for everyone.”

Two weeks later, the team, holding a 28-10 record, piled into vans and headed to Salina for the state tournament. In their first match, the Cougars went up against Derby, losing two close sets. The next match, against Washburn Rural, ended with losses in the first two sets. The third match of the day put the girls up against Gardner Edgerton. The girls fought hard, winning both the first and third sets, but that was not enough to keep their dreams of a state title alive.

“I wouldn’t have changed things about state because the last game that I ever played as a cougar was a win,” Garrett said. “We would have rather ended with more wins, but the wins and losses that we did collect are what made us the team that we were.”