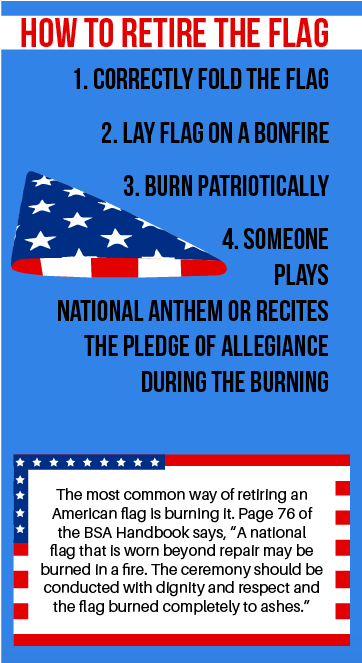 Initially, burning a flag is deemed unpatriotic, but once the flag reaches the point of being worn beyond repair, it must be retired. Thomas, an Eagle Scout in Troops 194 and 67, decided to build a flag retirement ring that could be used for years to come.

He was inspired by his family’s military past. His great grandfather was in the Air Force and served in WWII.

“I have a close connection with the military,” Thomas said. “Four family members have served and I wanted to honor them.”

He searched for projects but couldn’t find anything that he would be passionate about. He thought, “Why do such a big project when you don’t feel that it will make a big impact?”

“I could’ve done some landscaping and said that was good, but I wanted the best possible Eagle project,” Thomas said. “A project that would be meaningful, a project that people would use often and a project that could be amazing, but could also be improved upon by other Scouts.”

When Thomas was five, he attended a couple of flag retirement ceremonies, the first of which was at Shawnee Mission Park when he was just a cub scout. He described it as “cool,” because the flag made the flames very hot. After the flames died down and the ashes cooled, his Scout leader pulled the metal grommets from the ashes and gave them to the boys who attached them to the bead catchers on their uniforms. At that age, it was hard for him to comprehend why and how the flag could mean so much to some people.

He didn’t fully understand until he took the National Youth Leadership Training (NYLT) course to learn to be a better leader. There he spoke with a man who told him about his time in the military. It was at that point he realized what the flag truly meant to people.

“I began to better understand what this flag means to so many people,” Thomas said. “It’s not just a piece of cloth, but a symbol for freedom, a symbol of hope.”

That meeting gave him some inspiration, but he still needed one more nudge to push him in the right direction. He was searching for a project that would make a difference and represent him and his family while giving to those who had served. His idea for a flag retirement pit came two years ago when he was volunteering at Veterans of Foreign Wars (VFW) Post 846 for Veteran’s Day through his middle school’s youth group.

“We had a flag retirement ceremony,” Thomas said. “The commander who was leading it was very passionate about respect for the flag, but we were still retiring flags in a metal barrel on a concrete slab.”

Prompted by his newfound inspiration, after six months Thomas had almost everything he needed, including $1,500 worth of materials, to make this project into a reality—everything except a location.

“I wasn’t having any luck in finding a new place,” Thomas said. “I stopped looking for about a year until one of my troop leaders told me about VFW Post 7397. He told me that they were very open to Eagle Scout projects.”

He met with the VFW commander Jason Parks, who eventually gave him the go-ahead to build his project. After figuring out where to get all of his materials, he started building.

After two years his fire ring was finally completed. At the first flag retirement ceremony using the pit he had built, more than 30 flags were retired. After the ceremony, Thomas felt like a weight had been lifted from his shoulders but he also felt really accomplished.

“As a Cub Scout, I never imagined my Eagle Scout project would reach so many people,” Thomas said.

Thomas said he couldn’t have done this project by himself.