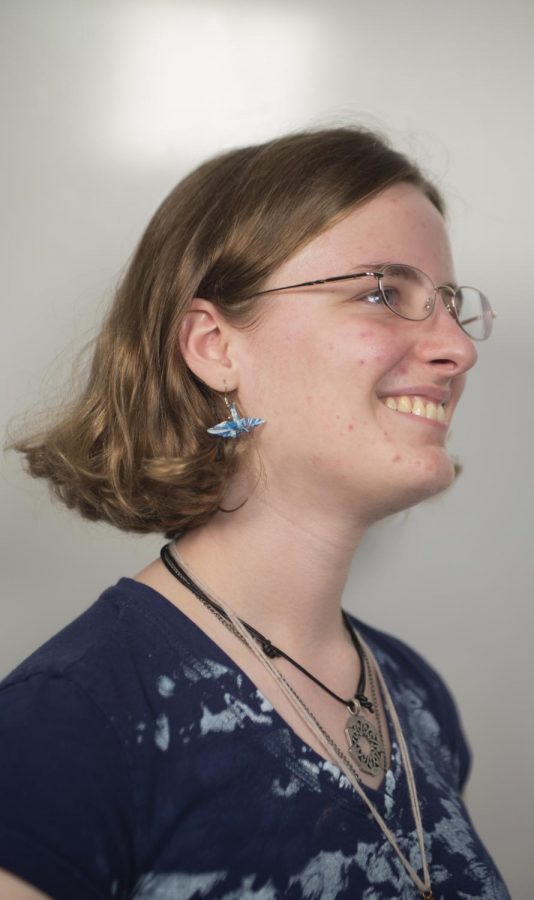 An ancient Asian legend promises that anyone who folds one thousand origami cranes will be granted a wish by the gods. Some renditions claim you will be granted eternal happiness or good luck.  Although senior Thea Clark isn’t quite sure what her wishes will be, she still spends around half her day carefully folding tiny pieces of paper into delicate birds.

“I don’t have to look at what I’m doing anymore,” Clark said. “I’m literally right now. If I’m not doing anything else with my hands, I’m folding origami cranes.”

Making these quarter-sized cranes without looking didn’t exactly come naturally to Clark. In middle school, she found herself getting scolded by teachers for always looking down at her hands as she folded paper to form the tiny cranes during classes. Now, she says teachers rarely even notice until she drops a finished crane on their desk once class ends, unless she has already left one at the start of the hour.

“ always seems to make them really happy,” Clark said. “They’re so surprised by it. I tend to not give them to students as much, unless they ask. I usually just find them on the floor later.”

Clark got her start making cranes before elementary school had even begun. Prior to  first grade, she was homeschooled. Her mother purchased an origami calendar, and one of the projects in the calendar included the instructions to make a crane.

“Cranes were the first thing I memorized how to make,” Clark said. “They’re like my default now.”

Although Clark learned the process of making a crane in kindergarten, she didn’t really dive in until sixth grade. This was when she heard about the myth of folding 1,000 cranes. Throughout middle and high school, it just stuck.

In fact, Clark spends so much time making cranes, her siblings have given her the nickname “Theabird.” After making thousands of cranes over the years,  Clark can now make a crane in just one minute and 24 seconds. She’s even considered making money from her folded creations.

“My earrings are cranes that I made,” Clark said. “ I’m planning on selling them one day.”

When she’s not folding cranes, Clark can be found immersed in other art forms.

“I’m really into ceramics, but I also like painting,” Clark said. “I just really like the act of drawing on paper and creating something.”

Outside of the artistic world, Clark is involved in Tabletop and Dungeons and Dragons clubs, both of which are sponsored by science teacher Adam Shirley.

“I always take a meandering route to one of my classes so that I can stop by Shirley’s room to give him a crane,” Clark said.

Just over a minute and a half later, Clark holds another paper crane made of post-it-note paper in her hands, and tosses it into her colorful bag overflowing with the thousands of other birds.