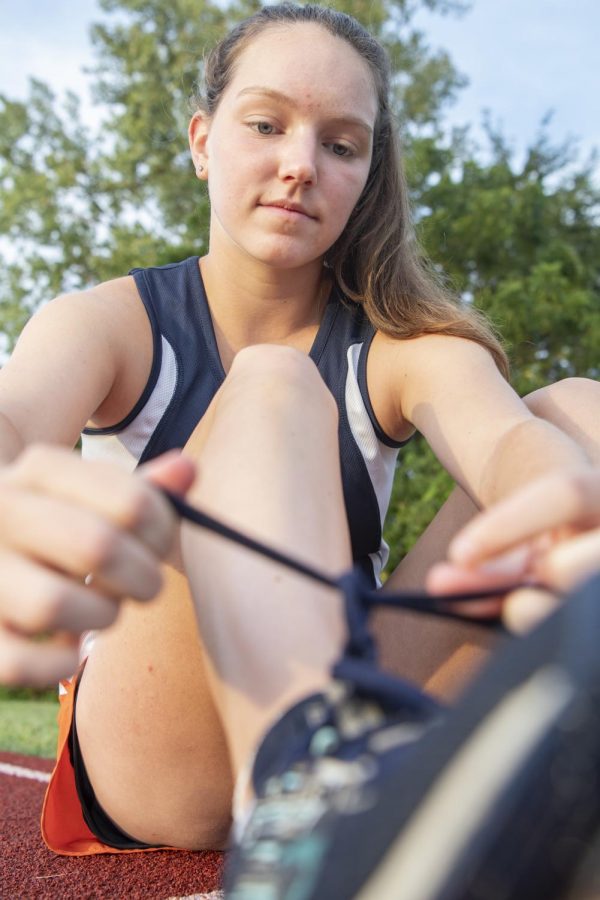 Senior Amy Kowalcewski laces up her running shoes and gets ready to run the first cross country competition of her final year of high school.

Kowalcewski has set goals for her senior year and hopes to use her performances from last season to help achieve them.

“I would like to run at state again either as a team and for myself because I’ve run at state the last three years,” Kowalcewski said.

Kowalcewski keeps a running log to monitor her progress and runs between 32 and 35 miles a week. She practices roughly three hours a day, usually from 3 p.m. until 6
p.m. Although she is not allowed to listen to music during practice, she likes to listen to music that hypes her up before races.

She is superstitious, so she always eats a piece of toast three hours before each race. She thinks if she eats anything else, it will affect her race. She only wears Brooks running shoes and her favorite are the Brooks Adrenaline shoes.

“Our whole girls’ team only wear Brooks now,” Kowalcewski said. “It is definitely our favorite brand.”

“It is hard to stay motivated to run sometimes,” Kowalcewski said. “It gets kind of uncomfortable, but I just want to get better every season. Getting a new always feels really good. Feeling confident at the end of the race is one of the best feelings ever.”

Kowalczewski enjoys the team atmosphere of the cross country team.

“If you’re training or racing, you always have
your team with you, even though it is an individual sport,” Kowalcewski said. “I just love the feeling when you’re done racing. It’s like a huge weight off your shoulders.”

Kowalczewski likes being able to push herself and see results from that.

“Being able to push my team and my team push me makes all of us better,” Kowalcewski said.

Kowalceswski predicts that her team will do pretty well this year.

“The girls have definitely worked very hard.
I am excited to see where that will take us this year,” Kowalceswski said. “I am just hoping that no injuries get in the way.”

During her high school career, Kowalcewski has most enjoyed competing against the SMN team.

“They are always about the same competition level as we are,” Kowalceswski said. “They’re pretty good and so are we. It is fun to have little rivalries with them,”

Kowalcewski started running in the third grade participating with the Girls On the Run program. She enjoyed it more than soccer and other sports that she was participating in.

Although Kowalcewski will hang up her competitive shoes after this year, Kowalcewski plans to continue running for a club team next year in college.