Catie Wood travels across the world to spread her love of Christ through mission work. 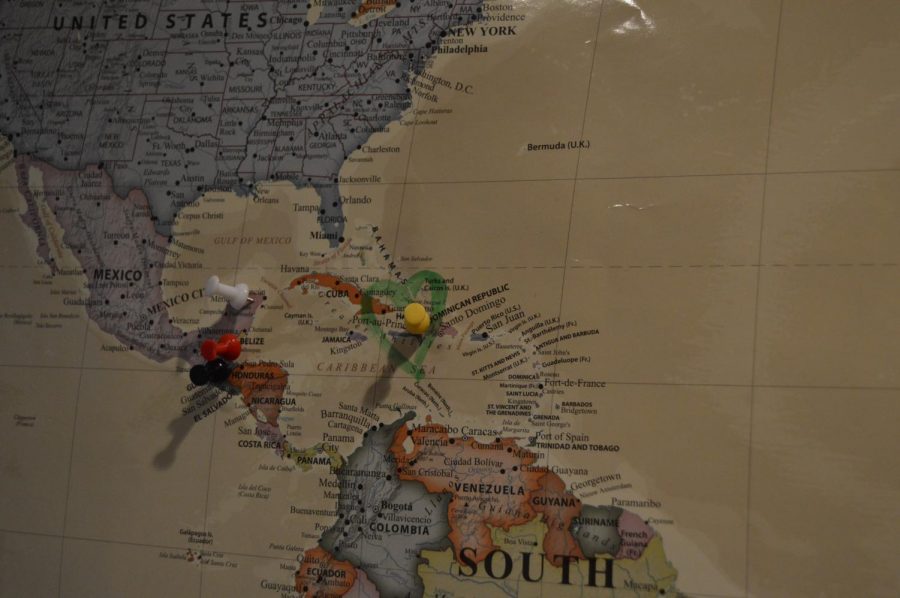 On one wall of Wood's bedroom hangs a world map with pins placed in the countries she has visited, and a heart surrounding Haiti.

From across the square, Catie Wood could hear the two mothers speaking to another volunteer. They were thanking her for what Wood had done. Standing outside of the brick building in the middle of a missionary compound in Port au Prince, Haiti’s capital, Wood was met by two young Haitian girls. As they reached up for her water bottle, Wood realized what it was that the girls wanted. The days were long and hot, and it was always necessary to fill up a bottle of water before leaving the compound, never knowing the next time there would be access to clean water. Wood filled the bottle with the cold, clean water just moments before the girls came to her. Wood reached for the 40-ounce bottle, completely full, and tipped it back as one of the girls sipped. She pulled the bottle away from her to give the other girl a chance to have a drink. Two girls, no older than six, and they drank the entire bottle without hesitation. Thirst, however, is not the reason Wood volunteered in Haiti. The trip, which took place last summer, was the first mission trip Wood had taken; however, her interest in mission work first began two years prior to traveling to Haiti.

“God kind of broke me down and I had to really dedicate myself to Christ,” Wood said. “I wanted to fully pursue Him. That was the point in my life when I genuinely started living FOR Jesus, when I realized that nothing in my life would be filled with joy unless I pursued Him first. For that to happen, there were some decisions I had to make. God was pushing me to step away from some things, things that I thought I would be devastated without. And, of course, at first taking that step away from these things that were really important to me hurt my heart a lot. But God revealed His love to me and just how purely joyful life can be when in pursuit of Him. I began to understand the importance of spreading His love to others.

And spreading His love to others is exactly why Wood traveled to Haiti last summer. She was given the opportunity to serve and inspire locals by providing insight to the love that she has learned Christ has to offer.

“What we did was kind of an untraditional mission trip,” Wood said. “It was a lot of exposure, and we did a lot of prayer walking, and a lot of talking to people and learning about the culture and hearing their testimonies and praying with them, praying over them. So what that looks like is walking around the compound in groups of two or three, or by yourself, because it was on the compound and it was safe, and we would stop at the hospital and pray for all that were sick inside and all that needed to get care, and just the obvious things that you pray for in a hospital. Then we would move on to the school building and pray for the administrators, and the educators, and the teachers, and the students, and the parents of the students, and the people who had sponsored the students from back in the states or back in wherever anybody had come from that was sponsoring a child in Haiti.”

Coming home from Haiti, Wood realized there was a way to provide hope to those devastated by the lack of it.

“Being in Haiti, I got that exposure to how people actually live around the world, and then comparing it to the United States is really crazy,” Wood said. “I was like, ‘Well, that’s not that’s not right. It shouldn’t be that much of a split. Kids shouldn’t be hungry and they should have clean water’ and, I don’t know, to me that’s not right.”

The extreme difference in the life Wood lives here and the lives of the people she met in Haiti are what inspires Wood to continue in mission work.

“There’s a quote and it’s like, ‘if the kids and the people in these nations had the opportunity to fix their economic situations and fix their, you know, hunger problems or whatever you imagine is the third world’s situation, why wouldn’t they have done it already?’”

Wood recognizes that the people in the nations she hopes to help are unable to help themselves. Wood will travel to the Ukraine this summer to serve in a similar way, but through a different program, Fellowship of Christian Athletes.

Although Wood knew she wanted to serve on another mission trip this summer, she was not sure where she wanted to go, or what group she would go with until one Sunday near the end of January, when everything fell into place.

“That day at church wasn’t really different than any other Sunday until the last five minutes,” Wood said. “The gears in my head were already turning at the idea of doing an internship with a mission somewhere, but I had no idea where God was going to plant my feet over the summer. There was a couple at our church whose names are Dima and Reily Rachkovskiyy. They kind of dove right in to everything that Foundry is about. They were serving in our youth group, which is how I got to know them better.”

The moment that Wood truly knew she was meant to travel to the Ukraine this summer, it just seemed so perfectly right to her.

“The moment after Dima and Reily shared their plans with us, I didn’t really think it through,” Wood said. “I just thought it would be where I should go. Without thinking, I was on my feet to ask them if I could intern for them over the summer. My body was totally acting without brain power. It was like a resounding ‘yes’ rang throughout and everything was certain. So, yes, it was a very sudden decision.”

Because she was already set on taking another mission trip this summer, it was not unrealistic for her to choose so suddenly.

“Considering the fact that I was already thinking about an internship, I wasn’t that uneasy about jumping into it. Telling my mother, on the other hand, was where the uneasiness came in,” Wood said, smiling.

This summer, Wood will be working with the Fellowship of Christian Athletes (FCA), and applies their vision of seeing the world transformed through Jesus Christ to her participation in the swim team.

“I feel like the whole team does an incredible job of pursuing teamwork.” Wood said. “Yes, swimming is, for the most part, an individual sport, but we swim fast with each other and for each other. We motivate each other during practice and push each other for the success of others and then, in turn, for the overall success of the team.”

But, not only does she apply the leadership skills she has learned through mission work, she also applies what she values about her relationship with God.

“In prayer at the beginning of each practice and in every conversation, I always make sure to emphasize that everything is ‘we’, nothing is on your own,” Wood said. “Yes, Miranda and I hold captain positions but that doesn’t mean anything. We are all one. You’re here to work hard for the girl in the lane next to you, and I think everyone understands that. At the start of every day, in our prayer, we always emphasize the importance of us doing it for God’s glory and in His name. Without Him we wouldn’t have this opportunity, this friendship, this bond, so it all comes back to Him.”

Visiting countries in need of a source of hope is important, although she emphasizes the value not of doing things for the people, but doing things with the people in need.

“Missions isn’t building a home, a well, or a church for a family or community,” Wood said. “It isn’t stepping into their lives and fixing a problem. Missions is relationship and connection. It’s doing those things, among many others, and teaching people that don’t know and deserve to know the love of Christ. It isn’t something you do for an Instagram post, it’s what you do to plant seeds that might not sprout until 10 years down the road. It is something you do because of the love of Christ that is in you, something everyone and anyone is capable of.”

Despite giving up the majority of her summer for two years in a row now, Wood knows that the difference she can make through mission work is much more important than what she would be doing at home.