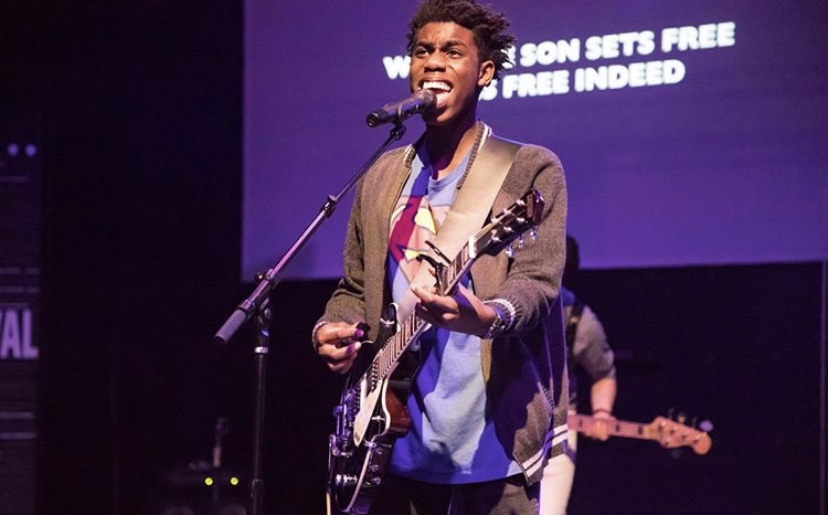 Walking onto the stage after the two-minute countdown, haze surrounds him, creating a more worshipful atmosphere. He looks up, all he can see is the spotlight. He looks down. He can only see two rows of people of the 100 people at OneightyKC, a youth group at City Center Church.

He strums his guitar once to catch the attention of his audience, then lifts his hands into the air.

He returns to his guitar.

“Waking up knowing there’s a reason,” he sings. “All my dreams come alive.”

“Music has always been a part of my life,” Mutava said. “I hadn’t really acknowledged how big of a deal it was until I was about 10.”

Mutava spends the majority of his life listening to music, replicating it, and trying new things to improve his skills and talent.

“I’m always wanting to create; I’ve realized, in general, that I’m a creator,” Mutava said, “I enjoy putting ideas forward and bringing them to life.”

Although Mutava understands how to play some basic instruments like drums, acoustic guitar, and synth, but focuses on the electric guitar, piano and his voice. He loves playing worship guitar as well as all the effects the guitar offers, like overdrives, delays, and a lot of modulation stuff. Mutava says he, overall, enjoys creating new sounds with the worship guitar.

Mutava’s favorite place to play music is in front of the audience at Oneighty.

“I just love playing in front of new faces and seeing new reactions and seeing how different people are impacted by the same song.”

Mutava is hoping to make an impact through his music. He says it’s a great experience having the opportunity to lead people in worship.

“I want to fulfill my purpose. I’m connected to music and I think music is a bridge between all different types of people. If I use it wisely, I can make a difference in this world.”

College students Austin Bachert and Zhanarden Vil are in a band, Pretty Running People, along with Mutava. Both Bachert and Vil also plays on the Oneighty worship team with him.

“It’s always a blast to be able to work with him and be a part of his creative process. He’s someone that really influences me musically as well, he’s been a primary factor in pushing me forward within the area of music,” Bachert said.

Mutava has a lot in store for him in the future, according to Bachert. He’s excited to see where he goes and is grateful to be a part of his journey.

At some point, everyone has doubts. There have been times when Mutava has been concerned that music wasn’t what he was cut out for, that it wasn’t for him.” But Mutava gets back up and says no to his doubt.

“I once heard that music is the most powerful healing tool given to us on the earth,” Mutava said, “It’s a connector between people. It unifies and brings others closer to each other. It’s not just something you throw away.”