The Show Must Go On

Even through unexpected complications, the company of "Almost, Maine" works to put together the first show of their season 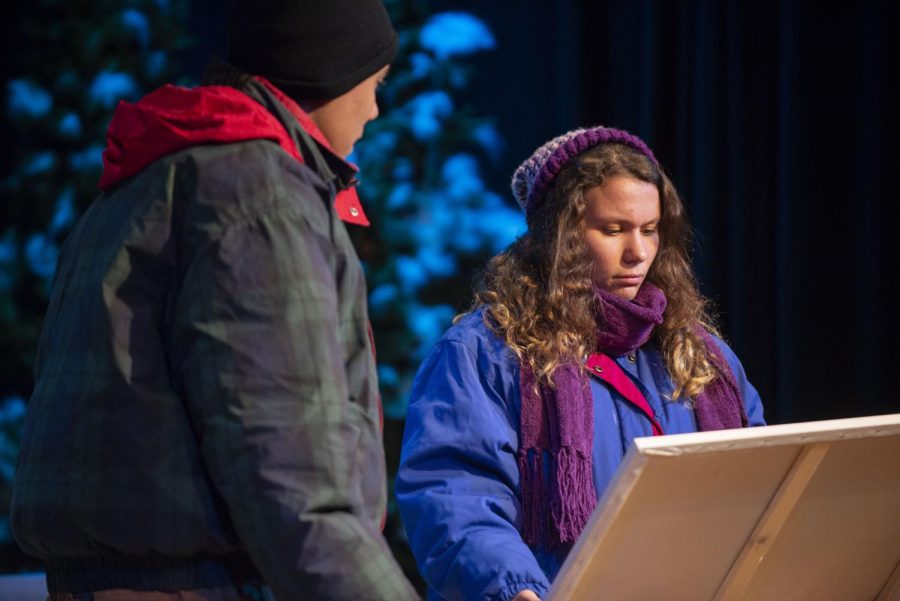 Under their 12 layers of winter clothes and the hot stage lights, junior Natalie Hole and senior Christian Anderson examine a painting during a dress rehearsal of "Almost, Maine" on Sept. 24.

The Shawnee Mission Northwest Theatre Department is to present “Almost, Maine” by John Cariani Sept. 27 to Sept. 29. Showtimes are Thurs., Fri. and Sat. at 7 p.m. with an additional matinee on Sat. at 2 p.m. Performances will take place in the SMNW Little Theatre at 12701 W 67th St. Shawnee KS.

Before the start of their first dress rehearsal, the cast and crew of “Almost, Maine” sat on the edge of the stage and in the front rows of the house and learned that their director, Jason Coats, would not be attending the rest of their rehearsal as they entered show week.

“Coats had come to every rehearsal until just recently,” cast member Claire Anderson said. “He had run into a large personal emergency and was no longer able to attend rehearsals. This left our stage manager, Ethan Schreiber to step up and run our dress rehearsals. Coats would obviously love to be here for us but he can’t do it with the hardships he’s going through.”

Their technical director, Judy Tuckness came in to sit in on the rehearsals, as the students needed approved adult supervision to be in the school past 2:40 p.m. Though Tuckness is experienced in theatre, Coats left the cast and crew mostly under the direction of his stage manager, as a way to prep them for the real world, where they might go through unexpected changes and have to take on new responsibilities.

Due to his emergency, Coats found himself in a completely unexpected situation. This is his first year at NW and he had never expected to have to miss out on the shows of his first production as the director.

“The run of this show was so different to start because we have a new director,” cast member Shantice White said. “Due to Coats’ absence, we’ve had to work around complications and stick together as a show, as a group of actors and techies.”

Through all the hardships, the cast and technical workers have taken on more responsibility and initiative than they expected to bring the show to a finished product for opening night.

“We’ve all had to pull together and work as one, which has been really interesting,” White said. “We’ve seen that we won’t crumble and fall apart on our own.”

Leading up to his unexpected absence, Coats put lots of thought and hard work into the his show choice and how he directed the actors.

“Coats is a very smart man,” actor Jackson Tomlin said. “He made us dig deep into our characters towards the beginning. With him here to begin with, it made it 10 times easier to develop our show.”

The actors of “Almost, Maine” like that the show is an interesting mix of comedy and drama, unlike the other shows in their time in the department. They had worked very personally with Coats to create the best version of their characters.

“I feel like no other production of this play will have actors as invested in their characters as we are,” Tomlin said. “The cast has formed such a bond, and we make the story of “Almost, Maine” come alive better than any other high school could do.”

Due to its location in the Little Theatre, as opposed to the auditorium, this show is much more intimate with the audience than a typical NW play. Coats chose this show, and the venue, to be one of the more unique and personal productions that the school had done.

“There’s a lot of passionate acting in this show,” Anderson said. “Some of these scenes are about cute love and sex and all that stuff. But there’s some about passion and fighting for those that you want to keep around. Sometimes you have to fight for a relationship, and in this show there’s a little bit of yelling and dynamic love.”

The members, both in and behind the scenes of the show have spent their nights leading to opening night building up set, costumes, lights and characters that will convey the story to the audience to the best of their ability.

“This show brings happiness to your heart. If someone doesn’t like happiness, I guess they shouldn’t see this show, but everyone likes happiness,” Anderson said. “They don’t want to be sad. And while some of this scenes might bring you down at first, they’ll leave you happy because you’re seeing yourself represented on stage. It will give you a new perspective on this world.”