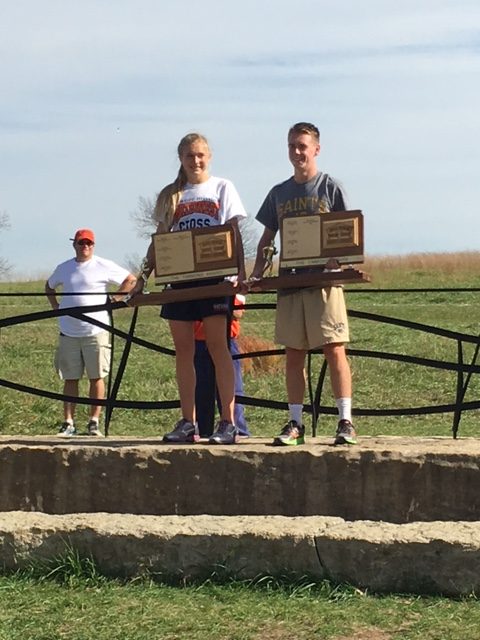 The boys’ and girls’ cross country teams were in action last Saturday competing at the State meet at Rim Rock Farm in Lawrence, Kan.

In the race junior Molly Born defended her title and set a new Kansas record with a time of 17 minutes 32 seconds. She beat her opponent by an 37 seconds.

“I have been training hard along with the team,” Born said. “After I cross the finish line I am really happy to be done with the race. I was surprised by how much space between me and the second place finisher there was.”

The girls team finished fourth overall, only 10 points behind third place finisher Manhattan High School. The next runner after Born was senior Camille Henderson who finished 25th. They improved from the eighth place finish last year.

“We had three freshmen, and you never know what freshmen will do,” head coach Van Rose said. “They ran pretty well and that was a plus for us. Fourth place is really good.”

The boys finished eighth in the race. The highest boy finisher was senior James Lang who finished 11th overall. Junior Michael Scott also finished in the top 20 coming in at 14th. The boys? improved from their 11th place finish as a team last season.

“We wanted to get sixth, overall with got eighth,” Lang said. “We were a little disappointed with that but we did beat SM East and every other team in our region. So we are excited about that at the same time. Next year we are going to hope to move our way up, last year we got 11th, eighth this year, maybe sixth next year.”

Coach Rose was happy with the team’s performance at this year’s State Championships.

“I think it went really well,” Rose said. “If you compare our times today versus two weeks ago, we are a little bit better.”

Lang wanted to finish his last race as a Cougar giving everything he had for his team.

“It was emotional,” Lang said “My biggest feeling was just seeing my mom as she was running up she had tears in her eyes. It just meant a lot for me to race for my school.”