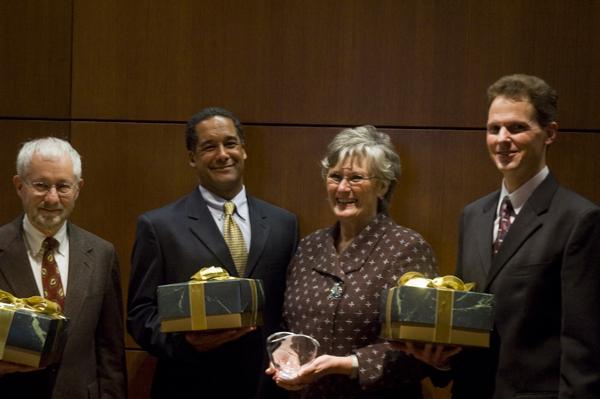 The Johnson County Library Foundation presented the Pinnacle Award to music teacher Doug Talley for excellence in the arts on Oct. 29.

“My wife nominated me, if you can believe that,” Talley said. “She’s a big supporter. I guess she figured I’m always busy with music.”

The Johnson County Library Foundation first presented the award in 2002. Winners are chosen because “they demonstrate excellence in their professional field or philanthropic pursuits,” according to the news release from the library.

Talley has taught music for 26 years and first performed in public sometime between 1976 and 1977. He plays tenor saxophone, clarinet, soprano saxophone, “a little bit of flute and alto , if I have to.”

Talley first became interested in music in middle school. He said that his teachers inspired him to play music professionally.

“I just thought I’d make a contribution in the field. I thought I’d enjoy it and thought I’d be good at it, so that’s what I chose,” he said.

Aaron Thornburg played piano for the reception on Oct. 29. Thornburg has known Talley since seventh grade.

“He’s been an example of someone who’s passionate. He’s shown me what it means to immerse yourself in jazz,” Thornburg said.

“Everyone I teach is special to me in some way,” Talley said. “I used to think of them, symbolically, as little chapters in a book.”