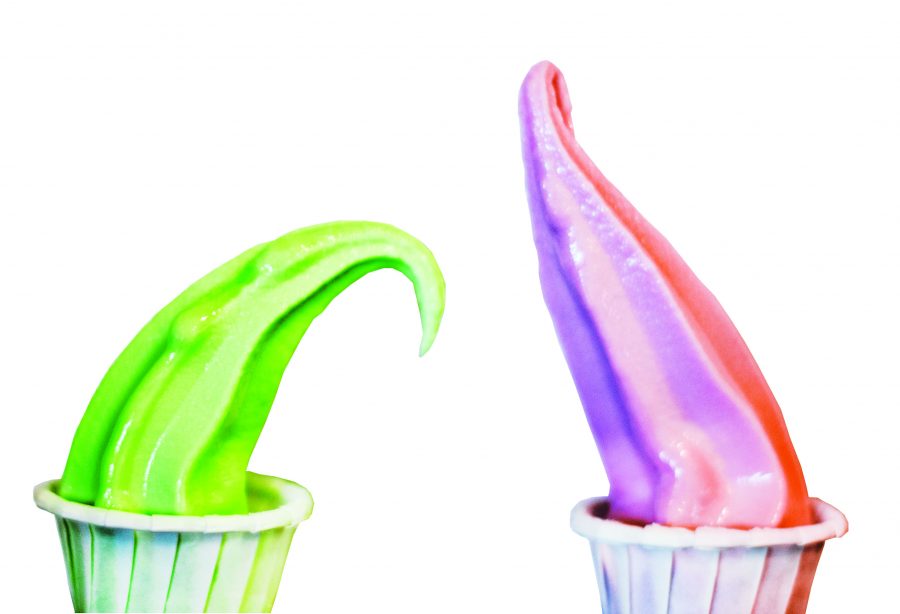 Craving a cold treat? We found the best place to satisfy your taste buds

Freddy’s has made their own frozen custard since the 1950s, and it was first opened by a World War II veteran in Wichita, Kansas. Now, there are over 26 states with a Freddy’s.
Frozen custard is different than ice cream. Frozen custard is a gourmet ice cream treat which is smoother because of the extra egg yolk in the ingredients. It is also done in air tight container which allows for minimal ice crystals. This also allows it to be served at a higher temperature and gives the custard more time than ice cream before it melts.
Being a restaurant started by a middle class man from Kansas, Freddy’s has a diner-esque feel. This gives it a laid back environment, which makes it feel a little nicer than an ordinary fast food restaurant.
If you are looking for a salty snack with your frozen custard, Freddy’s also serves burgers and slim cut french fries. The prices range around $3-$4 for your frozen custard, and $1-$2 for fries, so for a snack, it would only cost about $5.
Although the weather doesn’t always permit, Freddy’s is the perfect place to sit in a warm, indoor facility, and enjoy a cold treat. Although they only have two different flavors of custard (chocolate and vanilla), with over 26 different toppings,so there are many combinations. If you are struggling on what to get, they have over ten specialty choices including sundaes, concretes, malts and milkshakes. They also have the option of a waffle cone (made in-house), cake cone, or in a bowl.
So, if you’re looking for an indoor environment that serves quality frozen custard with a hometown feel, Freddy’s is the place to go.

If you want frozen custard, why not go somewhere which actually specializes in frozen custard. Sheridan’s full name in fact is Sheridan’s Lattes & Frozen Custards, showing that frozen custard is one of their first priorities. It is their craft, and they have perfected it.
Sheridan’s has an endless amount of combinations. They have dozens of pre made combinations of custards, malts, latte’s, smoothies, and other frozen drinks, and if you have something more specific in mind then you can create your own frozen treat with 37 different topping options and the choice of chocolate or vanilla custard (if you are making a frozen custard that is.) You can always use those sweet, savoury, salty, or fruity toppings to make other things, such as smoothies, as well. One of my personal favorite smoothies there is a pineapple blueberry smoothie (not on the menu), and as for custard, the chocolate razzle dazzle is a must have. The razzle dazzle is what is actually on their menu, rich custard topped with fresh raspberries and delicious hot fudge, but when you order it with chocolate custard it takes it to an entirely new level of richness.
Sheridan’s is not a full, sit down restaurant. Instead your two options are a drive-through or a walk-up window. While in the winter, waiting outside in the freezing cold to receive frozen custard is not the best way to get pumped up for your ice-cold treat however, in the warmer seasons it is the perfect combination. A frozen treat, a sunny day and a little bench with a picnic table: what could be better? The all year around bonus to just having stop-and-go windows are that it is fast and there is no expectation to tip. So in the end, the lack of tipping makes up for Sheridan’s prices, which are on the higher end. Even for frozen custard.
Sheridan’s is the best place to go for frozen custard because it is what they specialize in. Their slightly higher price range is well worth it for their superior quality. With seemingly endless possibilities, Sheridan’s is sure to satisfy whatever craving you have.
is sure to satisfy whatever craving you have.

by Lena Dennington and Nate Compton