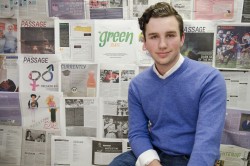 For nearly my entire high school career, I have been just about the closest thing to Peter Parker you could find: shy, nerdy, a little bit of a loner. Did I mention that I am also a photographer?

Something changed during the summer before my senior year. And no, it wasn’t because a radioactive spider bit me.

I spent a month in Africa and came back radically different. There was one moment that will always stand out to me. We stopped in a township one day to spend time with the local children and to visit the church. I sat with one of the local boys in the back of the crowded church. After a while, we both became bored and went outside to play. We ran and walked around the church and we played catch with whatever he could find. Every so often, he would grab my hand and tug on it until I picked him up and held him for a little bit. After three or four times of picking him up and putting him back down, he noticed the logo on my jacket. It was a small spider. He then spoke for the first and last time that day.

This took me by surprise.

He then flung himself toward my head, wrapped his arms around me and refused to let go. He thought I was a superhero. I didn’t need to fly or have super strength to be a superhero. I just needed to play with him and hold him and treat him like a normal kid.

Looking back on that day now, I have realized one thing: I’m done being a shy, awkward introvert. I’m done missing out on everything because I’m afraid of putting myself out there. Ever since that day I’ve been trying to live a little bit better. Live a little more like a superhero. Looking back on the on the past six years, it shocks me to remember the stuff I have missed out on. All the friends I could have made, all the cool events I missed because it was out of my comfort zone.

Has it worked? Yes. Over the past six months I have been happier and developed better friends just because I’ve started to step out of my shell and decided to be a superhero and stop being a super zero.