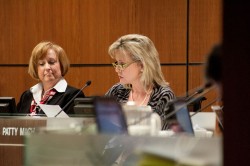 After 20 children and 6 adults were killed inside the seemingly secure walls of Sandy Hook Elementary school, safety standards in school districts all over the nation are being scrutinized.

The Shawnee Mission School District is no exception.

According to a statement made by Superintendent Gene Johnson just days after the news that shocked the country, the district already practices many safety measures, including a “strong partnership with local law enforcement… attentive and aware staff and administration… visitor check-in requirements, locked doors during school hours with a designated single entrance… surveillance cameras, which monitor doors, hallways and areas surrounding all school buildings.”

“In times like this, it is a reaction to try and find the one solution and make the pain go away, and make sure that we never have to go through that again,” Douglas said. “Unfortunately that reaction is often irrational and produces spontaneous and often ineffective results. Sometimes the best results come from taking a little bit of time to assess the situation and figure out exactly where we are since the events of Newtown.”

Revisions to emergency procedures of first responders, teachers and students were also discussed by Douglas in a plan referred to as the “Defense of Our Schools Project.”

“My hope is that sometime by the summer we will have a working document,” Douglas said.

Johnson also reviewed the entire district policy on school safety, including enforcing mandatory visitor check-ins, ensuring that local law enforcement officials have blueprints of each building and dealing with the issue of secure entries. According to the superintendent, “12 out of our 33 schools have secure entries and 21 do not.” Johnson said that would be the focus in the coming months.

A major concern that was also addressed at the board meeting was the layout of Rising Star Elementary school in Lenexa. The school, which was built in 1990, was created as an open-concept school, or one without doors. The lack of doors further decreases protection for students in case of an intruder.

“We are not only responsible for educating our children, but providing a caring safe and secure environment,” Rising Star teacher Jori Nelson said in the open forum at the meeting.

The school also has a “not at all realistic” code red policy, according to Nelson.

“We have no first line of defense, should an intruder come into the building with the intent of harming our children or our staff,” Nelson said. “We are literally wide open.”

In response, the board has agreed to vote on these proposals at the next meeting, which will take place on January 28.

As for security at Northwest, administrator Eddie Lyday said that only minor changes have been made.

“We did make a change in how we lock up the doors before — after the bell rings ,” Lyday said. “We always lock all the doors except for two on the west side so that when people come in they have to come right next to the tardy table and the person sitting right there can see them.”

“The doors are a concern simply because there are so many of them,” Harrington said. “We do try our best to get around to  every one of them several times a day to see if they are locked.”

Over the past week, there have been two drills at Northwest to insure that students know where they are supposed to be in an emergency situation.  After the code red drill, Harrington addressed all of the safety concerns that he had over the intercom. He stressed the importance of knowing the safest places to go if you are outside of the classroom during an emergency.

As part of the safety procedures, students who are in the halls or bathrooms should proceed to the nearest classroom. Teachers are strongly encouraged to check the nearest bathrooms for students if an intruder is not in the hallway. If a code red occurs during lunch, students should report to the kitchen or the gym.

Lyday also referred to the proper safety response as the laws of self preservation. He suggests that in a situation where a student is caught outside of a classroom, they should run, hide or, as a very last resort, “go out fighting.”

A teacher’s job is to make sure students are as safe as possible in the school building; however, Lyday wants to remind students that “no matter where you are or who you are with, you have to be aware of your surroundings.”

While Harrington doesn’t think that Northwest has an immediate security concern, he warns students and staff to always be aware of safety hazards and dangerous situations.

“We don’t have a large reason to be concerned, but we should never stop being cautious and pro-active and vigilant,” Harrington said. “We should always remember those things.”

Student Reactions
Students reflect on the recent school shooting tragedies and respond to questions regarding safety at Northwest.

Q: Should students at Northwest be concerned for their safety? 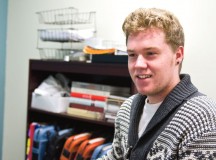 A: “Even in the light of recent tragedies, those kinds of violence are not common. I don’t believe that we should be too afraid about those kind of things happening at our school. But we do need to be aware of the signs.  It would be ignorant to think something like this could never happen here.” — SENIOR LUCAS LOWRY 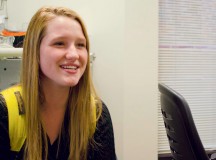 Q: Do you think our code red policy is efficient?
A: “I don’t think the code red procedure will keep us safe at all. Like, in my Spanish room, the corner is close to a window, so there is no safe place. Just leaving the building would be better.” — JUNIOR CARLY BENJAMIN 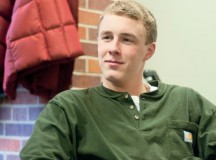 Q: What should be changed about the current security system at Northwest?

A: “Nothing really needs to be changed. I mean, nothing’s gonna really stop it from happening. People are gonna get mad if they up security because they’ll think the school doesn’t trust them to be responsible.” — SOPHOMORE ZEB MARSHALL 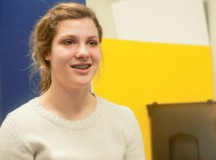 Q: Do you think that something seriously violent could happen here?

“I don’t think that something will happen because we live in a good area, and we have plenty of policemen always ready to come help us. I think we’ve really equipped our school well enough.” — FRESHMAN AMELIA HOELTING