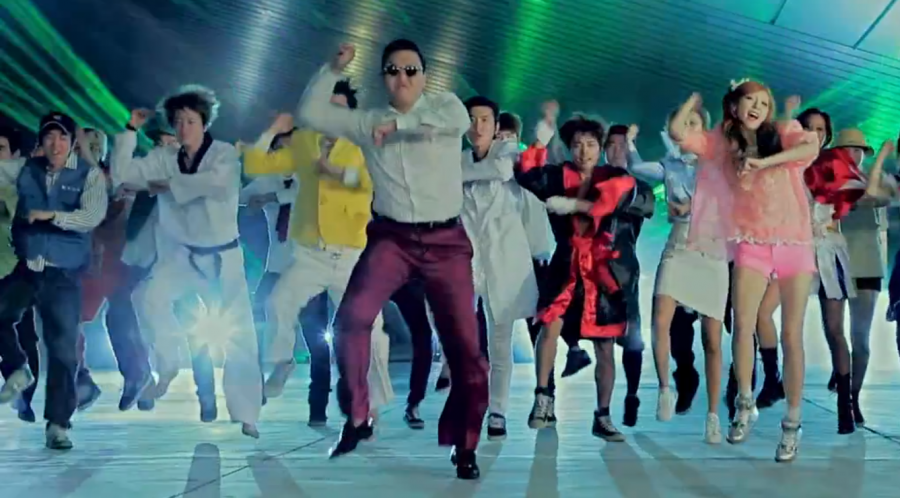 This video has over 200 million views and has become a sensation all over the world. It’s not Charlie biting his brothers finger or the adorable surprised kitty. The new viral Youtube video is Gangnam Style by S. Korean singer PSY short for PSYCHO. His horse dance is now the new Dougie.

Gangnam Style is part of a new Korean Pop wave called K-pop, which has been gaining interest from all parts of the world. Paris was the first European country to host a K-pop concert. The concert was sold out in 15 minutes. Over 300 European fans held a flash mob outside the concert demanding another. One month later, another K-pop concert was held in Paris and sold out in 10 minutes. Many Koreans describe this popularity as Hallyu, meaning the Korean wave.

Gangnam Style is referring to the area in S. Korea called Gangnam that is comparable to our Beverly Hills. It’s full of expensive stores and people dressed in brand name clothes. He is mainly making fun of the lifestyle of having fancy clothes and money. The music video was actually filmed in different parts of Gangnam.

In an interview on VH1, PSY said, “I never thought would go this far. I just thought it would be popular in Korea.”

Due to the song’s popularity, there have been many different parodies of the song.

The University of Oregon has posted a video on Youtube with the Oregon Duck acting and dancing to the music. On the Jay Leno show they edited a video, so it looked like Mitt Romney danced to Gangnam Style to get popular with the minorities and the young people. Of course everything thats trending needs a reaction from TheFineBros, Benny and Rafi Fine,  where they have teens watch videos and then ask questions to see if whether the teens like it or not.

If you’re hip thrusting in an elevator or doing the Dougie on the sidewalk, Gangnam Style will never go out of style.